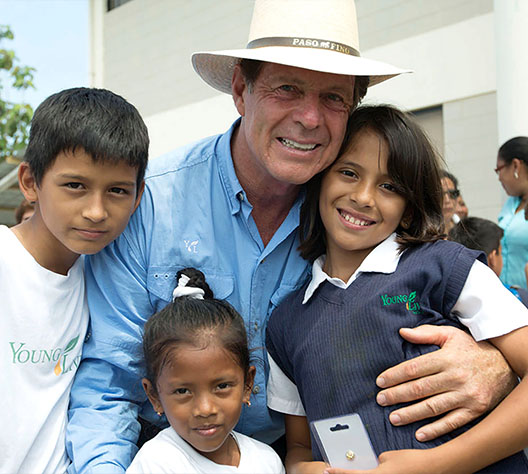 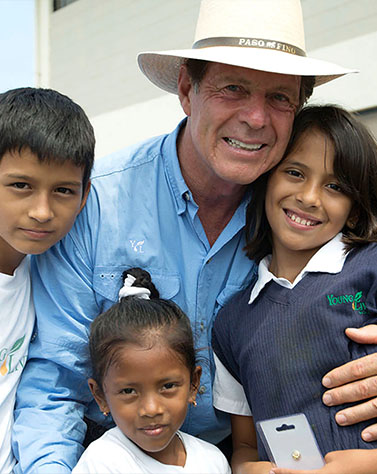 Give in Memory of D. Gary Young
Founder. Humanitarian. Friend.

It was with tender feelings to learn that D. Gary Young, our founder, chairman of the board, mentor, and friend, passed away on May 12, 2018.

The Young family has asked that in lieu of sending flowers or gifts to please donate to the nonprofit that is a reflection of Gary\'s heart—The D. Gary Young, Young Living Foundation.

Thank you for taking the time to honor a truly great humanitarian. We will forever remember Gary with great fondness.

GIVE IN MEMORY
OF GARY “Personal passion to help others is a tremendous driving force within the soul of so many of our members. “This is what Young Living is about—changing the world one person at a time.

ANSWERING a CALL for HELP

"No one had responded to their need for help. I knew we needed to."

After visiting Nepal in January 2016, Gary Young was overwhelmed with the devastation that still existed in a nation slowly recovering from the 2015 earthquakes. Tragically, nearly one million people in Nepal were still homeless at this time. In Yarsa, Nepal, Gary witnessed how many victims were struggling to survive the sub-zero temperatures in the winter months as bone-chilling wind whistled through the gaps in their makeshift tin shelter, which offered little protection against the heavy rains. Water dripped from above and seeped in from below, rendering these living conditions painfully inadequate.

Motivated to respond, Gary penned a heartfelt letter to Young Living members outlining the desperate situation and asked for their help. (You can read the letter at YoungLiving.com/RebuildNepal.) The response to his letter was unbelievable and the Young Living Foundation officially started the Rebuild Nepal project.

FROM START TO COMPLETION

In December 2017, we finished the school in Yarsa and it is now called the Young Living Academy, Yarsa Primary School. It was just as Gary envisioned it. Then just this April 2018, the last home in the village was rebuilt and the news brought tears to his eyes and joy to his heart. What Gary had promised the people of Yarsa was now complete. “ I felt a wave of compassion envelope me and knew that I had to go, I had to help. “The greatest happiness we find is when we help others, especially those in such tremendous need.

WHERE IT ALL BEGAN

It started by recognizing potential where others saw despair.

It\'s because of Gary\'s tremendous heart that The D. Gary Young, Young Living Foundation was created. With his vision and guidance, the Foundation now stands as a thriving example of how companies—and how each of us—can make a difference in this world.

While establishing the Young Living Essential Oils farm in Chongon, Ecuador, D. Gary Young noticed the poor condition of a schoolhouse he passed each day. Forty-two students in first- through sixth-grade were crammed into one tiny room, forced to share limited supplies, and sit at broken tables while their volunteer teacher gave lessons on a damaged chalkboard.

Responding to the need he saw, Gary worked with local community leaders to build the beautiful Young Living Academy in Chongon, Ecuador.

The opening of the Academy in 2009 marked the start of The D. Gary Young, Young Living Foundation.

Over the years the Foundation has evolved into the primary avenue through which Young Living Essential Oils demonstrates its commitment to helping families and communities worldwide. Gary guided it with his lifelong passion for serving and empowering individuals far beyond their present circumstances. Following his lead, the Foundation is dedicated to improving lives with more impact than ever before.

It started with Gary recognizing potential where others saw despair; by listening to voices not yet heard. And that’s how we will continue to operate. With every project we initiate, every partner with whom we collaborate, or disaster that we respond to, we first look to help those who have received far too little attention.

Gary will be deeply missed, but we will carry his legacy forward by continuing to empower the underserved and fulfilling his vision. He envisioned a world where Young Living Essentials Oils were in every home, including homes in the slums and even those without a home. At the Foundation, we are making this vision come true by donating Young Living oils and products to our partner organizations as well as local organizations.

Gary also envisioned a world where children are provided with the resources and opportunities necessary to become confident, self-reliant leaders who can take control of their own health, provide for their families, and positively change their community.

The Foundation plays a major role in fulfilling Gary’s vision of bringing essential oils toevery home in the world.

Together with Young Living members, we deliver oils to some of the most remote homes, villages, and communities.

Because when Gary said every home, he meant
EVERY home.